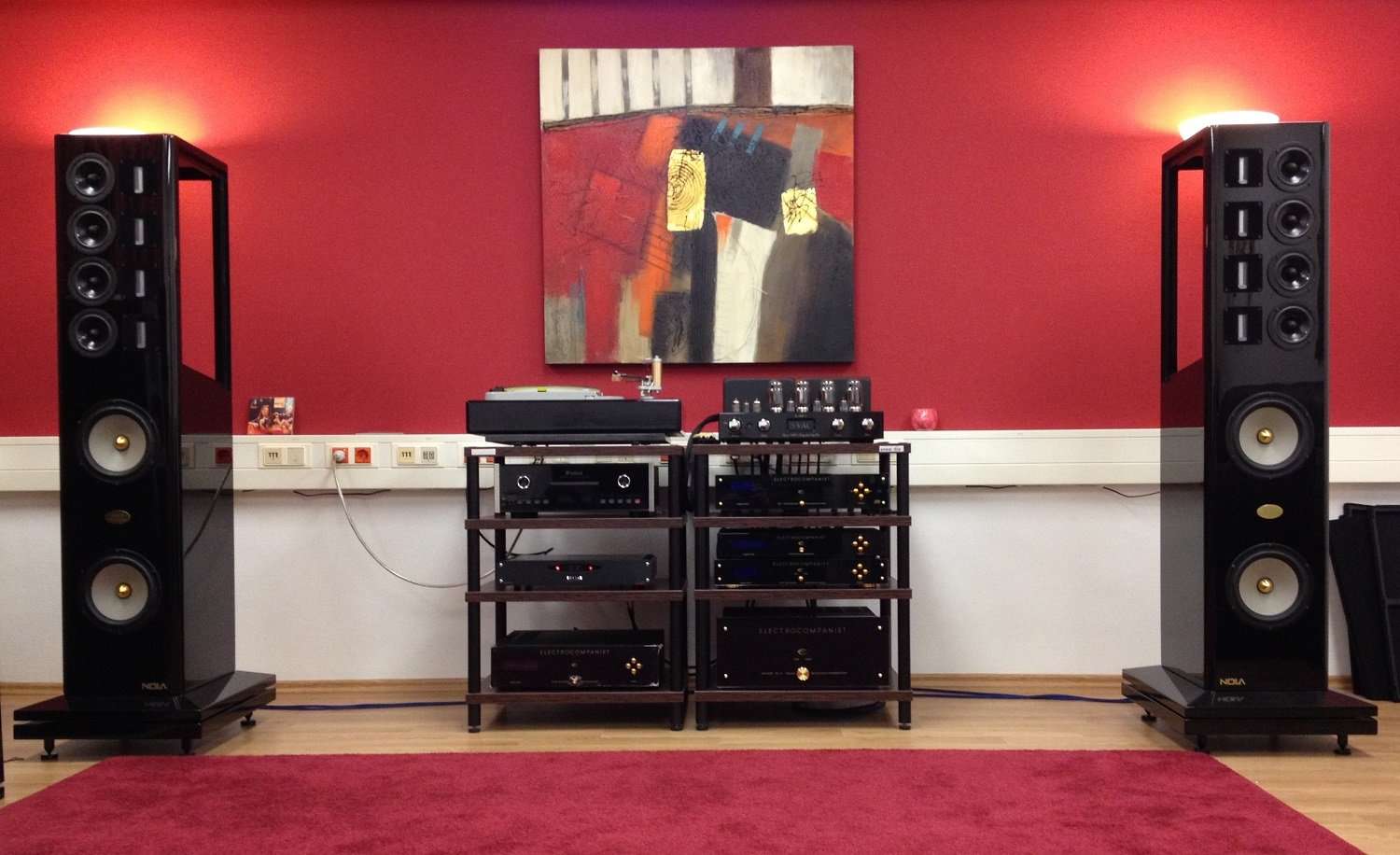 Nola Grand Reference VI Gold represents a major upgrade to our flagship loudspeaker system. All elements of the system that affect sound quality have been upgraded. Drivers now number 54 of the highest quality transducers for the system.

The true ribbon tweeters have been fitted with twice as powerful neodymium magnets, which double the acceleration of the diaphragm while further reducing the very low distortion. The special Alnico magnet midrange drivers have reduced mass and optimal phase plugs for faster response and lower distortion. The magnesium woofers have been redesigned for much greater speed and “openness” for life-like sound. The subwoofer drivers have been improved with lower noise and distortion.

In addition, the external passive crossovers now use the newly developed UnisonTM technology so that one pair of mono amps or one stereo amplifier can drive all four towers. The subwoofer venting system and the wiring, which is now Nordost mono-filament silver, have all been redesigned for superior performance.

The system, consisting of eight pieces, comprises the following:

The Nola Grand Reference VI Gold Main Towers employ a total of 23 of the highest quality transducers per channel. The Main Towers are built in mirrorimaged arrays for accurate imaging. Eight unique magnesium cone 4½ inch cast frame woofers per channel reproduce bass and mid-bass frequencies from 40 Hz to 400 Hz with unmatched speed and power. Four woofers are mounted at the top and four are mounted at the bottom of the Main Tower.

The eight 4½ inch woofers employ cast, surface-treated magnesium cones with natural rubber surrounds, GOLD-machined phase plugs and are driven by powerful ALNICO ring magnets for perfect harmonic structure and no overhang. Perfect piston response is maintained to a high 10 kHz, far beyond their 400 Hz operating ranges, for excellent impact and low coloration. The very low moving mass sets these drivers apart from typical woofers, and allows this range to be reproduced without delay or compression. The towers have four separate chambers with two woofers mounted in each chamber, and each chamber is loaded by an individual rear-mounted double-flared port. There are a total of four rear-mounted ports per Main Tower. Cabinet walls are bonded with proprietary damping layers for inaudible coloration.

This low frequency section of the Grand Reference VI Gold reduces the moving mass to only 27% of that of previous versions. The effect of this reduction in mass is a quantum improvement in providing a lifelike bass attack and “open” vocals.

The all-important midrange system consists of six 110mm tri-laminate cast frame transducers per tower, operating on an open baffle dipole array over the range of 400 Hz to 3500 Hz and driven by premium Alnico magnet systems. The six midrange transducers are deployed in a short vertical line array, between the woofers and adjacent to the tweeters. The open baffle Alnico midrange drivers provide excellent low-level resolution and dynamics, while eliminating cabinet midrange coloration. Harmonic structure is especially accurate, while the special transient response of this driver (as has been commented on before) allows clear separation of the attack, sustain and decay elements of musical sounds for a more life-like reproduction.

The high frequency transducer system consists of nine 4-inch true ribbon tweeters per tower, operating in a short vertical line array. These transducers are true ribbons wherein the conductor and the diaphragm are one and the same. The moving mass is only .0061 gram for near instant acceleration. Extreme high-level transient attacks are taken in stride without harshness, allowing for instance, live levels of cymbals and other harmonically rich musical sounds to be reproduced. Driven by heavy neodymium magnet systems, these transducers are equally comfortable reproducing nuance as well as extreme peak levels. Nine small ribbons are utilized in lieu of one large ribbon in order to take advantage of the superior control of the smaller diaphragm, for greater accuracy.

Each transducer is isolated in a separate vented chamber to eliminate interdriver interference. A 3-inch diameter exponential flared port is provided for each 12-inch transducer. The port is flared both on the inside of the enclosure as well as the outside, for minimum low frequency distortion. Special low distortion voice coils driven by massive double-stacked seven pound magnets for each driver provide greater than 1¼ inch peak to peak linear excursions. Output at 20 Hz with both towers driven is greater than 120 dB. Proprietary damping material is applied to the cabinet walls to further reduce coloration.

The effect of the Subwoofer Towers is to add “space” and dimensionality such that the listener is transported to the venue where the event was recorded.